Christiansted, St. Croix, (May 25, 2017) – Today U.S. Virgin Islands-based AeroMD officially put a Cessna Citation Bravo jet into service, as its primary and dedicated medevac aircraft.  The upgraded plane is a prime addition to the AeroMD fleet, in conjunction with aviation partner Bohlke International Airways.  The new plane will offer AeroMD members in need of medical airlift, the ability to arrive faster to their medical facility destination.  It also opens options to travel to more hospitals and specialty centers at greater distances without a refueling stop.

AeroMD President and Chief Medical Officer, Dr. Brendan Anzalone said, “We are pleased to introduce the Citation Bravo into our fleet.  We strive to continually improve the air ambulance service we offer.  This aircraft has state-of-the art medical equipment built-in that is essential for successful medevac missions.  In sum, this new plane goes faster and further.”

The Cessna Citation Bravo jet offers a range of up to 1,587 nautical miles; has a top cruising speed of 460 miles per hour; and a maximum operating altitude of 45,000 feet.  It only requires a runway of 5,000 feet for take-off or landing, which makes it ideal for the limited runways at airports in the Caribbean.  The plane’s interior is 278 cubic feet, typically configured for nine passengers and two crew.  Configured as a medevac aircraft, it is spacious for the patient, their travel companion and the AeroMD medical team on-board. 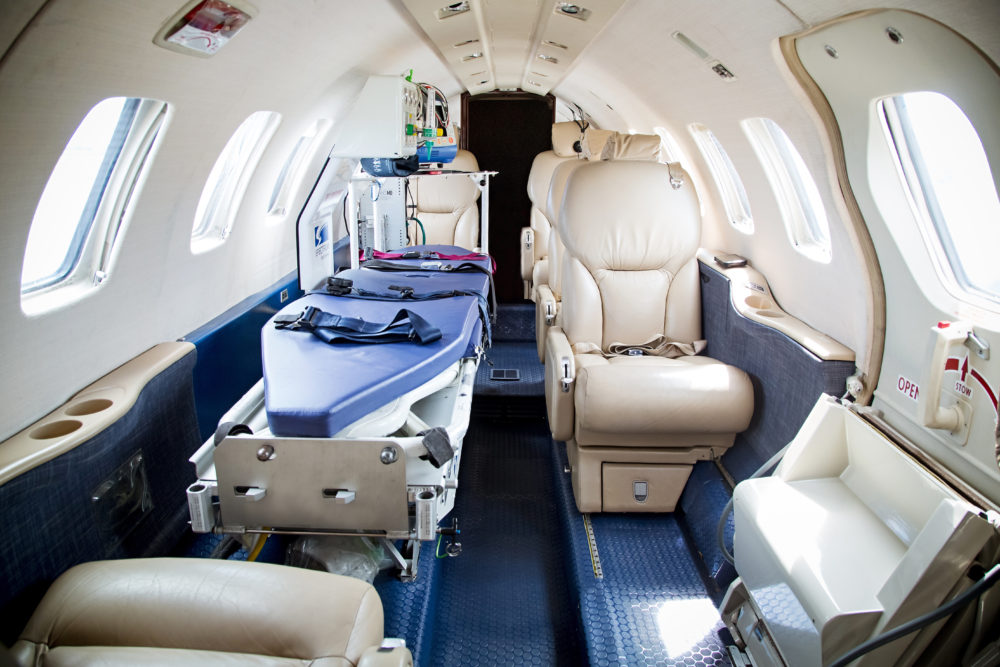 Several other aircraft options are available to AeroMD, for medical emergencies in which several patients need airlift simultaneously.  Now two years into offering air ambulance service to the Caribbean, AeroMD has completed more than 400 successful medevac missions airlifting patients from the area.  They are the only air ambulance service in the region accepting Medicare patients.

“This streamlined aircraft is an upgrade for AeroMD.  It is already equipped with an ADS-B transponder, years ahead of the FAA requirement,” said William R. Bohlke, President and Chief Pilot at Bohlke International Airways.  “We are proud to play a role in providing this much-needed emergency medical service for the U.S. Virgin Islands and the Caribbean region.”

AeroMD is the exclusive air ambulance service with a dedicated medevac aircraft on the ground in the U.S. Virgin Islands.  With its 24/7 communications center on St. Thomas, along with aircraft and medical personnel on St. Croix, AeroMD offers modern air ambulance service with rapid response time to the medically-underserved Caribbean.  AeroMD (aka Air Ambulance Caribbean, Inc.) was founded in 2015 with headquarters at Nisky Center on St. Thomas and an office at Henry E. Rohlsen Airport on St. Croix.  Find out more by calling 340.715.7942.

AeroMD Air Ambulance serves our neighbors throughout the Caribbean and worldwide.

This website uses cookies to improve your experience while you navigate through the website. Out of these, the cookies that are categorized as necessary are stored on your browser as they are essential for the working of basic functionalities of the website. We also use third-party cookies that help us analyze and understand how you use this website. These cookies will be stored in your browser only with your consent. You also have the option to opt-out of these cookies. But opting out of some of these cookies may affect your browsing experience.
Necessary Always Enabled

Any cookies that may not be particularly necessary for the website to function and is used specifically to collect user personal data via analytics, ads, other embedded contents are termed as non-necessary cookies. It is mandatory to procure user consent prior to running these cookies on your website.